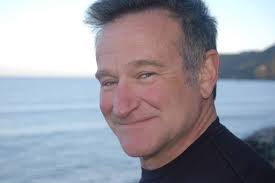 Yesterday, I got the news that Robin Williams had died. I found out on Facebook, then verified the facts looking at online news websites. Soon after the flood of trending posts began to saturate my news feed. To be honest, I didn't mind because I loved all the reminders of the movies he starred in and he is someone that has had a special place in my heart of all the stars out there in the world. A few hours after the news broke, I did find a post from a friend that went in a different direction. This friend remarked about his chagrin in having to endure a week of posts regarding Robin Williams. I then clicked on the comments and some of what I read disturbed me. Not because some people don't care about this actor, but because it revealed an ignorance to the human condition and a callous view that I cannot wrap my brain around. You see it is suspected that Robin Williams died from a suicide. Suicide can bring up an array of colorful emotions and opinions. One of the comments simply said: "Suicide=selfish" and I have to admit I have heard it before. While I get why someone would say that, I respectfully disagree or rather see a different viewpoint that trumps that perspective.

You see when I was 18, I had an abortion, another choice often labeled as selfish. The thing is, I was and am adamantly opposed to the act of abortion. I couldn't believe I had done something with which I fervently disagreed. That sent me not only on a journey of healing, but one for answers. I found some answers 8 or 9 years ago when I heard a speaker, Greg Hasek, say that the problem with "True Love Waits" and other like conferences challenging teens to save sex for marriage is that people don't make choices out of their moral compass and what they know to be right and wrong, instead people make choices out of their fears and insecurities. That simple statement turned a light bulb on in my head. I got it. The key to aiding others in life is not just in education but in helping them face and tackle their fears and insecurities. I made my choice to have sex outside of marriage and then to have an abortion after I discovered I was pregnant because I was scared. That fear took over everything I knew in my head.

This newfound understanding took another step when I learned how the brain works. You see when someone gets emotional, the surge of emotions blocks blood flow to the brain and inhibits someone from being logical because your brain needs that blood flow to work in making logical choices. This was an even greater a-ha moment because it makes a lot of sense. I have encountered countless women who are freaked out and feel alone, choose an abortion, then later beat themselves up, like I did, because they knew what they did was wrong. This phenomenon while applied to my abortion story, isn't limited only to that area. How many of us get caught up in a sale only to later have buyers' remorse? And while buyer's remorse isn't that serious, unless we just bankrupted our entire family, this true biological experience can devastate lives. Someone dealing with clinical depression or severe bullying or abuse may in a moment of emotional overload make a choice to end their lives. But they don't have the luxury of regret. That choice was final. Maybe it is in the end selfish, but I hate defining it as such because I would say 90% of what we do is selfish. That is not a cold hard statistic, but the reality is we are selfish people. The American culture breeds a "look out for yourself" mentality. So if we are going to start labeling things selfish then we better be ready to spend a great deal of time. Selfish isn't the point, hurting is. Frankly, I think its selfish to point the finger at someone who is desperate and decides to take their life and say "selfish" because my question would be, what are you doing to help those people?

We live fragmented, lonely lives. Sure we have thousands of Facebook friends, but when life goes south and its out of your control, who can we really turn to? Who is there to help us pick up the scattered pieces of our lives? I heard it once quoted by Fredrica Mathewes Greene that, "A woman doesn't want an abortion like she would want an ice cream or a Porsche, but like an animal caught in a trap, gnaws off its leg to become free." This reality can be said for many of the desperate choices people make to include suicide. We have an obligation to each other, and when people fall it is all of us who are to blame. If you want to know more about where my passion for this came from feel free to read my post, "Like Me." We obviously, can't make the decisions for others but we weren't made to be islands either. We need each other to survive. There are times when we do all we can for someone and it still isn't enough. Maybe you are a lucky one with a strong support network, but not everyone can say that. You can't be all things to all people, but if you chose to show up in one person's life you can make a huge impact through that one life.

People like bullet points so here are a few steps all of us can take.

1. Choose to be Selfless - Thinking beyond ourselves is a choice. We must first decide if we even want to attempt living life for anyone else.

2.Take a time out - All of us have environments we frequent often: work, the gym, the golf course, a bar, church, etc. Pause your routine and next time take note of the people around you, maybe someone that is in the peripheral.

3. Check In - Take a minute to connect with someone new, maybe its someone you say hi to every day but it never goes beyond that. Invite them to coffee or just stop and see how they are really doing. Showing someone you care, can make a huge difference.

4. Move In or Move On - Truthfully we can't make a connection with everyone and expecting to save the world all by yourself is a set up for burn out and failure. If you don't connect with someone, you made an attempt, move on and try it with someone one else. If you have connected in a surprising way, put yourself out there enough to get to know them. Allow this new person into your life. Relationships are baby steps so make sure to have realistic expectations.

5. Repeat - Whether it works the first time or not, the truth is if you choice to continue to live this way, it will change your life. Thinking of others is always a good thing.

Posted by Carrie Guy at 5:54 PM No comments: