Last year, talking with teens on a local high school campus I had a rather enlightening conversation. I was talking to a girl, who will remain nameless, who told me she didn't dream about the future because she was sure to be disappointed. What good would dreaming do when she would just get hurt in the end? The thing is, she has a point. Why dream? At the time, I was experiencing life in the realm of broken dreams as I watched my dreams shatter as they hit the ground. I pondered her position and see many people live out this position, even if they don't express it. Hope is one of the threads that holds our pieces together. Its the fuel in our car that keeps us going down the road. We don't always see our dreams come true, but pushing through helps transform us to became something amazing. We may also see our dreams come true. I have an almost 4 month old son that is proof that we can dream even when life would say stop. I hope that today's youth will learn to dream and hope and be open to the possibility and be able to fail and learn to pick up the pieces when dreams don't come true. As Mama Cass would say, "Dream a little dream of me, na na na na na na na, na, na, na, na na na na....." Keep the dream the alive.
Posted by Carrie Guy at 5:39 PM 1 comment:

Email ThisBlogThis!Share to TwitterShare to FacebookShare to Pinterest
Labels: dreams, Mamas and Papas 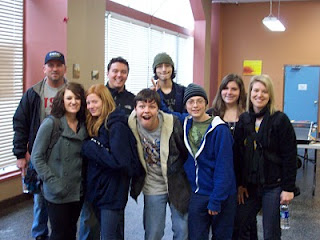 I’ve had the privilege to experience planet earth as a playground as I’ve travelled to 27 countries on more than 3 continents. Experiences have made places on the map come alive in my heart and mind; the treasured memories of certain spots have made me downright giddy at the thought of them. When we frequent a city often enough it is cemented in our minds with distinct definition.

This is true for a teenager in my youth group, Jessica Parker. Jessica has ventured around the city of San Francisco most of her 14 years. While she lives 4 hours away, San Francisco has offered an array of experiences journeying with her mother, a florist, to various venders in the area and growing in the knowledge of a city which holds her family’s baseball obsession, The Giants. Close friends have had season tickets all her life and going to games has become a tradition throughout the years in the Parker household. It is a city that Jessica not only knows, but loves. But this past spring something changed.

When Jessica signed up for the youth group trip to San Francisco for Spring Break she had know idea the metamorphosis that was about to take place. We took a small group with leaders from Project Sixty-One, a ministry of YWAM (Youth With A Mission) Pismo, to the YWAM San Francisco base to serve. Though only a few blocks from Union Square the YWAM base sees far less tourist traffic as its sits in the heart of the Tenderloin District. While there are many variations of the story of how the district came to the name of “Tenderloin,” the most commonly accepted is that in years past police officers were paid higher wages to work in that area due to crime rates and nefarious activities. Because of this higher wage they could afford a better cut of meat, the tenderloin.

Needless to say, it’s a rough neighborhood with more than its fair share of homeless, harlots and heroine addicts. During our time there we were granted access to the lives of those on the street as we served hot chocolate and prayed for the needs of the people. We were awakened to the high number of massage parlors being used as store fronts for human trafficking, more specifically sex trade and learned the power of prayer as we walked the streets praying for each of these known locations to be changed into something glorifying to our Creator. 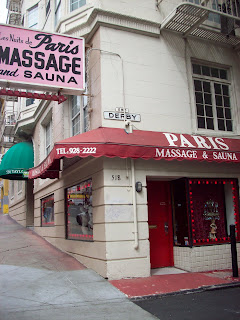 Jessica noted buildings she walked by in the past with no idea that women were being sold for sex inside. During our trip God broke Jessica’s heart for the women of the city. Jessica, a girl not prone to emotion, cried steadily for hours at a time, uncomfortable with this newfound emotion as she felt the pain of others. While her love for the city has not wavered her perspective has changed and she mourns now for the women who cry alone with no hope. In essence San Francisco was redefined and her family’s playground has now become her spiritual battlefield. I am proud to say I saw God grow in all in our group now dedicated to pray for a city in bondage to so many vices.
Posted by Carrie Guy at 5:27 PM No comments: